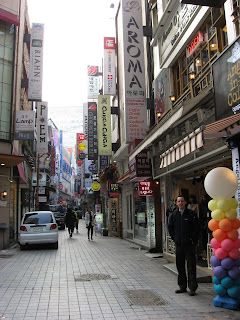 We grabbed a few hours sleep, a shower and breakfast before we ventured out into Seoul. At almost 10 am Seoul seemed like it was still sleeping. The streets were empty and many of the shops were closed. We wandered around the pedestrian walkway near our hotel. It was lined with clothing shops and restaurants. Many of the signs were in Hangul and English.

Just as we were heading towards the subway to goto the Adoption Agency the street vendors and shops started to get going. When we would return later that afternoon it was packed with people and vendors.

As an aside: If you ever find yourself in Seoul this is a great area to be in. 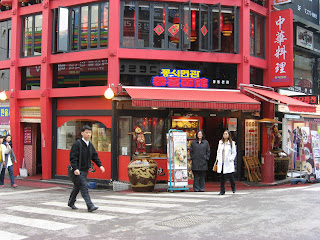 This picture answers the burning question...Why are you so tall? It seems everyone is under the same impression as I was that Koreans are not tall. During our visit I saw lots of men & woman taller than 5 ' 8". At 5' 10" I was taller than most of the woman but not by much.
No comments:

Of course neither one of us could sleep on the plane...13 hours plus later...we arrived in Seoul. The airport was modern and clean. We picked up our bags and were greeted by Mr. Sato our driver. It was now almost 5 am and the streets were dark and empty. Drew & I were struck by how dark Seoul is at night. Not like NYC which is lit up like a Christmas tree year round. Most of the office buildings, parking garages, stores... don't leave their lights on.

Mr. Sato did drive like he was in a chase scene from the Bourne Idenity. Crossing 4 lanes to make an illegal u turn while blowing through a red light!

We stayed at the Hotel Ibis Myeong-Dong. We LOVED it. It was close to everything! It was modern, the staff was very helpful (they even acted as translators on a phone call to Holt for us), everyone spoke English, breakfast was yummy with east & west options, the rooms were clean... The best part was the price $119 a night. The room was small -- think boutique NYC hotel size -- but it had two full size beds and a wicked toilet that did everything!
No comments: