What's in a name?

Grown In My Heart is hosting its second Adoption Carnival. The topic is names and how they relate to the adoption triad. To read more entries or link up your post visit Grown In My Heart. 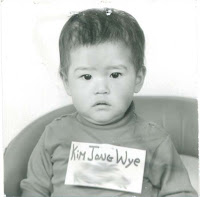 When I was born I was presumable given a name. I was called that name for 15 months of my life and then one cold January day I was abandoned on a street corner in Seoul. I was found sitting on the street corner crying and referred to the police. I was found but my name was lost forever.

As a young woman I often day dreamed of returning to that street corner hoping to hear my name whispered to me by the ghosts of my ancestors. And when they whispered my name to me I would somehow begin to remember who I was and understand everything that had happened to me.

After that January day, I was given a Korean Name and identification number and yet another name when I was adopted several months later. Since then I have had so many names and have not been particularly attached to any of them. When people ask if they can give me a nickname I usually shrug my shoulders and say call me whatever you'd like. I know several people that are very specific about their names or their children's names. There are no nicknames and the correct pronunciation is always stressed. I never could relate to that. I guess that is why in our family everyone has about five nicknames.

I heard a snippet on NPR the other day, in between the singing and bickering in the back seat of the car, about how when we pass we die three times. First is when your body dies, the second is when you are buried and the third is when your name is spoken for the last time. I don't know what they were referring to and who the quote is attributed to but for a moment in time all I heard was silence and my heart grieved again for that little girl sitting on the street crying. I wondered if her name, my name, had been spoken for the last time or if there was someone still keeping my memory alive.

Luckily the name I cherish the most - no matter how over used it is - sent me crashing back to reality. "Mooooooooommmmmmmy! Emme won't let me sing!" I wiped my eyes and looked up into the rear view mirror and smiled. I smiled because I know in my heart that the only names that matter are the names our loved ones call us. Whether it be a Hey Honey from my hubby or a Mommy from my girls, it doesn't matter how mundane or frequently used it is... nothing sounds sweeter.

Email ThisBlogThis!Share to TwitterShare to FacebookShare to Pinterest
Labels: Adoption, Grown In My Heart

I loved reading your feelings on this topic and found it very moving and profound. I think many adopted people feel the same way. I too will never know the name my birth parents gave me and cooed to me when I was a newborn. If they even did that! I too have gone through several names, but you are right, that in the end the most important one and that brings identity and meaning to my life is the one ER calls me by.

And so true that the only names that matter are the ones our loved ones call us.

Ohh it's so beautiful! thanks a lot

I'm a subscriber from Spain cause I love your crafts and now I now your history and I have no words, I read you and imagine you there, so litle, so sweet, crying...

I send you a big hug from this way of the ocean :)


(sorry for my terrible english)

I find it heart wrenching that they never asked you your name or that your birthfamily never left you with any trace of your name. I've heard stories of BP's leaving notes pinned with names. It's part of the reason we kept our son's names...so they can have part of their first families with them at all times.

I so enjoyed reading your post. Thank you for writing it. I agree, the sweetest names are the ones we hear every day from our loved ones. Hugs, Peach

"I wondered if her name, my name, had been spoken for the last time or if there was someone still keeping my memory alive."

You've implanted an indelible image in my brain -- a name spoken for the last time by birth parents. I thank you for that, for sharing that despite your pain.

Thank you for sharing that... Recently I've become a little overwhelmed with being adopted and having children that are adopted. There are times when I question everything that I'm about and the one thing that always keeps me grounded are my boys. To me my adopted family is just that, but my boys and I share our adoptions and our questions about adoption. They make me feel worth something... they make me truthful and honest to myself - I don't know if a name would do that except for "Mom".
XOXO

What a beautiful post. Thank you for sharing. Mommy is a pretty beautiful name.

"I was found but my name was lost forever." This will stick with me for awhile. And this as well: "I wondered if her name, my name, had been spoken for the last time or if there was someone still keeping my memory alive."

I wonder this for my daughter. But you are right - the names that truly matter are the ones our loved ones call us.

Thank for this post.It was so thuching.I was crying as i was reading the last lines...I just can t say anything....Well ..Thank god for my little persons who are calling me mum!

Hi,
Im from Israel and I'm a subscriber to you blog.
I just wanted to let you know that your story touched me, and that I wish you to be happy with your family for ever

Love and hugs from over seas :-)
Sapir

I'm very touched by this post - and it is beautifully written. Thank you so very much for sharing this with us. And "Mommy" is definitely the sweetest name on earth.

That's just heartbreaking. I wish I had something better to say, but nothing's coming. I read your post and kept scrolling but just had to come back to say something. Your writing is wonderful, the voice is so clear and perfect. I'm so glad you have a name now that you love. Nothing is better than Mum.

thanks for sharing this...it made me think a lot about how everything I have ever experienced has made me to be the person I am today.
I did have a birthdate and name pinned to me when I was found, or as the story goes...shin hyi oak...or something of that nature (I don't know the exact spelling) and I was called that until I was naturalized. When I went to change my name to my married name, the social services officer asked me if I had other names besides Abigail Hofman, and I said no, but then realized that HyiOak was actually what I was called in Korea. I don't identify with that name much. I definitely do identify with "Mummy". :) It is so interesting how your identity grows new layers. Thank you for this post! best, Abbie

Oh, I love this post. Thank you for sharing these intimate thoughts. The mysteries of life are sometimes what keeps up moving forward. Your children are beautiful and I know they are the winds that propel you each and every day. We all look to our past for reference sake but in the end, our future is what we desire most of all. Be well.

What a beautiful, lyrical post. I was honored to read it. It is remarkable that the love of our family today can sometimes help to soothe the wounds of yesterday.

That was beautiful. Thank you.

Again I say WOW! Your story is very similar to my adopted sister. She was abandoned at 2 in a market place. She did know her first name (Young Ran) but did not know her surname. She was given the surname of the babies home director in Souel (Kim).

Thank you for sharing. I am going to share your blog with my sister.