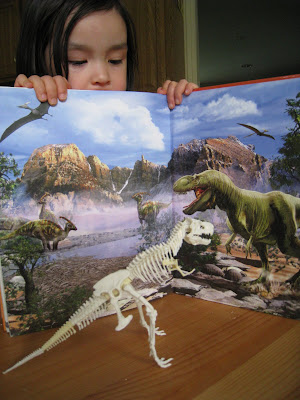 Lulu's loves dinosaurs. Every visit to the library she takes out 4 new books on dinosaurs and Paleontologists. She has decided she wants a dinosaur birthday party (her birthday is in September.) She wants to be a friendly T-Rex for Halloween. (Luckily my nephew now in 7th grade went through a similar phase at a similar age and has a very nice costume.) Last week we went to Border's and Lulu saw a dinosaur book with a model T-Rex encased in plaster in the Bargain book area. It was $3.99. Even though it was so cheap I didn't want to buy it because we are trying to teach the girls limits. Plus it limits the begging if they know we are going to say no. Usually she forgets about the item. Well she was talking about it for days. So I told her she could earn the book. I gave her one chore - to sort the shoes in the hallway and line them up in pairs - she is still keeping it up and actually enjoys it. She takes pride in her shoe line and gets upset if Em comes and messes it up. Plus, she had to be a good listener and follow simple routine requests. Well she earned her book/kit. This was our first foray into "earning" a prize. I'm still not sure it was a great idea and don't plan on making a habit of it but if any of you have an opinion about this let me know. 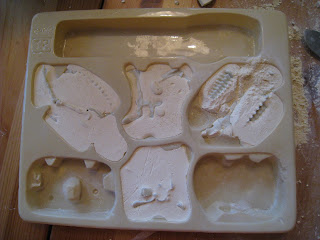 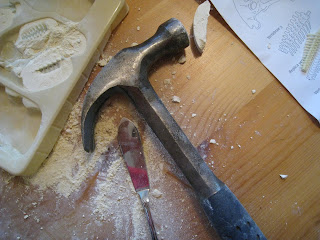 With that said, I have to say this was a great buy! Lulu was and still is excited and interested in the book and model. I thought after we realized it was going to take a year to excavate the fossils she would have lost interest. She and her Papa earnestly sat scraping away at it for a half an hour without making a dent. So Mama took matters into her own hands and attacked it with a hammer and butter knife. 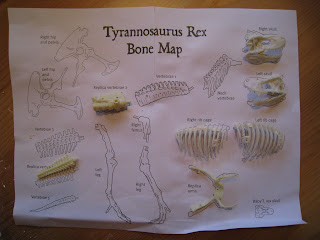 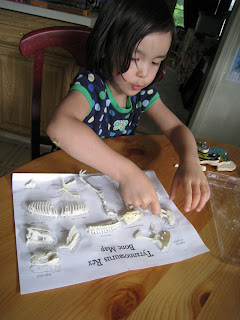 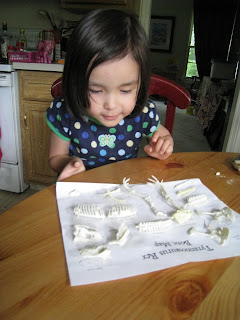 While I wrestled with the excavation Lulu took each bone that I freed and placed it on the bone map provided. Look at how happy she is! We talked about what a rib cage was and where the vertebrae are! 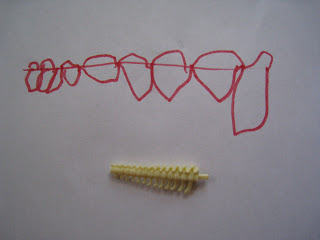 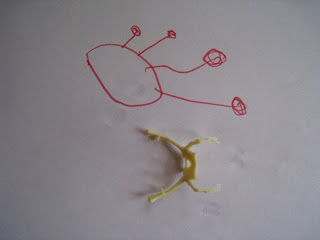 I also had her draw the bones. I love her interpretations of each bone! This project took about 3 hours over 2 days. Lulu always ran back excitedly to rearrange her bones on the map and wait patiently for a new bone to be freed from its plaster tomb! Lulu even help assemble the model. Which amazed me. I showed her which pieces fit together and she snapped half of them into place. Like any toy half the pieces don't fit without a lot of coaxing and some muscle. Although, I went upstairs to get Emme from her nap, Lulu had successfully taken the model apart and was ready to start putting it back together. It is so wonderful to see your child light up from learning!

After telling Grandma all about the book and how she is going to excavate the bones. Grandma said, "Just like an Archaeologist!" Lulu replied, without missing a beat, "No, Grandma, like a Paleontologist!"

I promise cool crafts tomorrow! I was inspired by your comments! Thank you!

Watch out! Mama with a butter knife coming to the rescue! LOL

I love how you incorporated Lulu drawing the bones. That is great! And the patience that the both of you have to do this activity over a span of several days....AMAZING! Not too many kids (or mamas) would be able to wait!

That is wonderful new way to learn. I tagged you today. If you want to join in please do so.

I think it's absolutely awesome and this activity kit was definitely worth its price. Look at all the extension activities that Lulu did. It must be great to watch your child to actually develop her own interest in something. I am still to see it here - our daughter seems to be into everything and nothing - just like me :)
On the subject of rewards (aka bribes) - I admit using them in our potty training efforts. Anna wanted a scooter, and she had to earn it with a poop chart. Interestingly, that in 3 days it took her to complete the chart (7 poops on the toilet), she lost interest in the prize. Typical Anna :)

If you to try this again, may I suggest just buying your own plaster of paris and recovering the bones that she earned. It helps if you smear vaseline on the items before covering - helps them come free faster even if they are gooey. My brothers were fascinated with dinos growing up too so we did this project a lot.