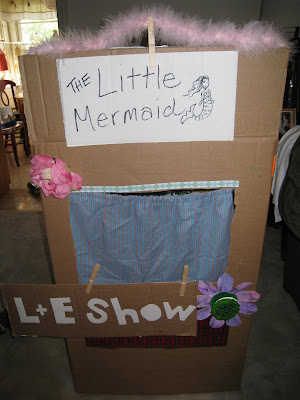 We bought the girls a sand table yesterday. Both girls were very excited about the sand table until I opened the box and the sand table was in several pieces. I began to scratch my head as I looked at the parts meanwhile Lu made off with the box...giggling as she dragged it away. So Em's nap time was all about...what should we turn our box into. The possibilities were endless. Lu quickly gathered some of her squirreled away treasures (she is a little crafty chip off the old block) to decorate the box, some Christmas wrapping paper, a piece of a pink boa, a pink flower, and some ribbon. 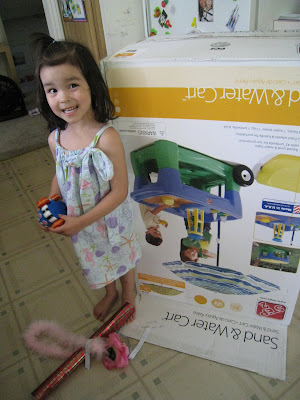 While we were brainstorming I turned the box inside out. Much better to start with a blank slate. 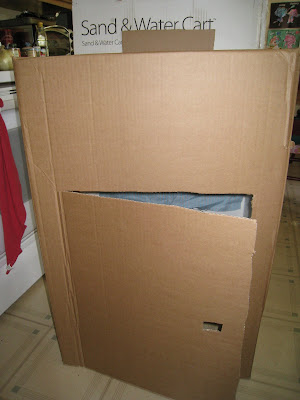 I suggested a puppet theater and LU went crazy for the idea (although I don't know if she knew exactly what a puppet theater is.) I cut off the bottom flaps, cut a big door on one side and a window on the other. I folded the top 2 sides and back flaps in and left the front flap up as the marquee. I secured it with a piece of cardboard to make it stiff. I also quickly sewed a curtain from a fabric scrap and strung it on some ribbon. I punched 2 holes each on the side corners and secured the ribbon by tying it tightly. 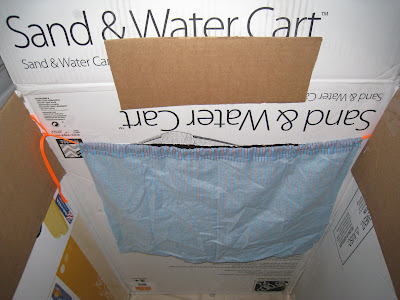 I quickly made some puppets from Popsicle sticks and paper plates. I cut slits into the two side flaps (which I had folded in earlier) to hold the puppets. 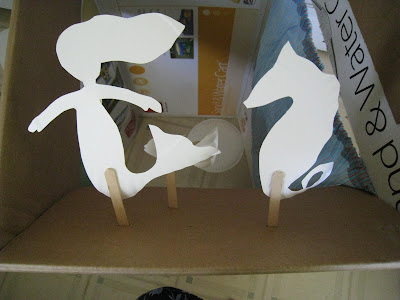 I made a removable sign from one of the flaps I cut off. It is secured with clothes pins. So it can be changed out for different productions. Lu has already requested a sign that says the Animal Show and Cinderella. 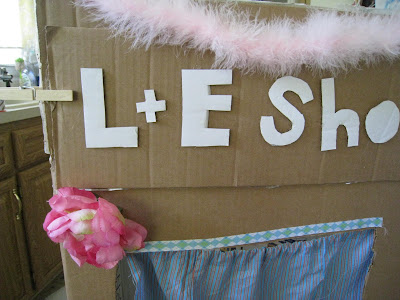 Lu and I decorated the front. This will be an ongoing activity. Stickers will be added, other objects will be glued to it... We already glued on one of our ribbon spool flowers to the front and drew on the sides since these pictures were taken! 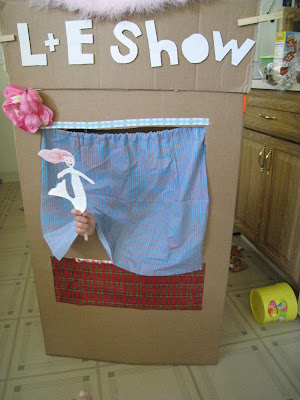 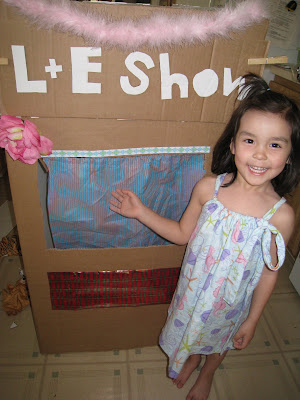 A happy little girl :-) She already has plans for her next box...a pirate ship! Ahoy!
Have fun crafting with your kids! Mama King

How fun, and something I'm sure you girls will have hours of fun with, that's before you even factor in the sand table! I love how the sign can be changed for different productions!

Oh my goodness! This is an absolutely adorable idea. I love how your craftiness and creativity went right to work in transforming this box into a work of art! I'm sure you will have some great times with this new "toy". Love it!

This brought back lots of great childhood memories for me. My mom used a box from a refrigerator to make a puppet theater for my brother and me, and she even sewed all the puppets to go along with it. The best part was that she recorded our voices doing a performance. It was so funny to hear what we sounded like back then!

That is great! I love the idea of an ever-evolving work!

You should read the book, "Christina Katerina and the Box" to her! Sounds like you guys are experiencing what the little girl in that story did! I love making things out of the boxes. One of my kids favorites were race cars. Because there was one for each of them, with moving steering wheels! I love boxes. You dolled yours up pretty cute!
Rebecca
RootsAndWingsCo.blogspot.com

So many times the box is as much fun as what is inside.

Great idea, I know they had a a lot of fun.

Super good idea to turn that box inside out! I've painted boxes before but that's just so clever! I need to get the boys a big box now...

This is so darn cute (and so are your little ones)! I will have to tackle this with the children that I volunteer with.

By the way, if they're contemplating a pirate ship, you might get a kick out of this post